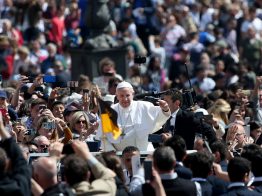 Pope Francis revealed in a book to be published next week that he had weekly sessions with a psychoanalyst for about six months in Argentina when he was 42.

ROME — At 42, Pope Francis had weekly sessions with a psychoanalyst for about six months “to clarify some things,” according to excerpts from a new book by a French sociologist scheduled to be published next week.

The revelation came in one of a series of 12 interviews the sociologist, Dominique Wolton, conducted with the pope at the Vatican for the book.

Excerpts from the book, “Pope Francis: Politics and Society. Conversations with Dominique Wolton,” were published in Le Figaro Magazine in France on Thursday.

Francis did not explain in detail why he had decided to pursue therapy, but he said he felt that he needed it and that it had helped him a lot, according to the book.

Vatican analysts noted that Francis, who is now 80, was a Jesuit official in Argentina at the time, when the country was ruled by a military dictatorship.

Francis, born Jorge Mario Bergoglio, established a rapport with the therapist, who was a woman, and she called him when she was close to dying. “Not to receive the sacraments, since she was Jewish, but for a spiritual dialogue,” Francis was quoted as saying. “She was a good person.”

The pontiff also highly praised the influence of “true women” in his life, including his grandmothers, his mother and the communist Esther Ballestrino de Careaga, founder of the Mothers of the Plaza de Mayo movement in Argentina, who demanded that the military dictatorship reveal the fate of disappeared children.

“She taught me how to think politics,” Francis stated, specifying that he is not a communist, as he has often been accused, but a Christian.

He said he was enriched by being in contact with women.

“Women see things differently from men,” he added. “It is important to listen to both.”

In a frequently casual tone, Francis also lamented some people’s inability to communicate. He interpreted the rigidity as a “form of fundamentalism,” particularly in priests.

“Whenever I run into a rigid person, especially if young, I tell myself he is sick,” he added. “The danger is that they are looking for security.”

Francis was trained as a Jesuit in Argentina. Jesuits are known for the value they place on introspection as well as spirituality. But until the 1960s the Roman Catholic Church expressed skepticism of psychoanalysis.

Only in 1967 did Paul VI acknowledge the important role of doctors and competent psychologists in determining the overall heath of future priests.

In Argentina, psychoanalysis is commonplace and does not carry the taboo it has in many other countries. Practicing specialists are on the rise.

Speaking of his current state of mind, Francis called himself free.

“I feel free,” Francis was quoted as saying. “Sure, I am in a cage here at the Vatican, but not spiritually. Nothing makes me afraid.”